Just in time, I saw Close to by Fiona Mackay at Klemm’s. At first glance, the work by this young (1984) Scottish artist looks rather naive. Big canvases painted in a watercolor technique. Some paintings have a line pattern. Others have a big round spot of paint in the middle, resembling an iris, or tie-dye. The line paintings, made out of shy but attractive colors are  interchanged with these eyeball canvasses. Staring into one of the latter was rather mesmerizing. But no more than that.

On leaving the gallery, there it was…

I had totally overlooked it. Suddenly, sexually charged images started to emerge from the line paintings.  And their color was no longer shy, it was nude! A gentle curve became a vagina. A swelling could be a nipple. And right beside them, all those staring eyes.

Sebastian Klemm, obviously a leg-person, saw stockings in the line paintings.  He told me that  for Mackay the connection between the work and the exhibition space was imperative. And although she normally asked writer friends to write the gallery text, she had insisted that the gallery staff wrote it this time. The result is a snap shot conversation. Like the glances one throws at someone across a room. 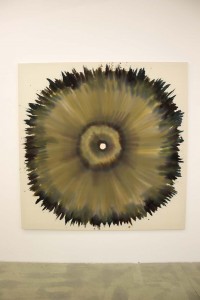 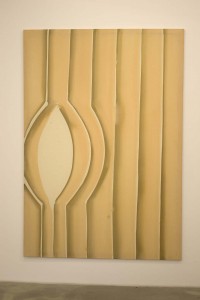 The disc- (or eye) paintings tie all the works together. Like observers,  they gaze at one another, male or female. Probing each others “bodies”. The question here, is who (or what) is the gazer and what is it that is being gazed at? The beholder seems to have walked into an intimate party, peeking at each other. It leaves the viewer with the sensation of being a voyeur.

Watcher, or being watched, the visitor is both. This is disturbing, because most paintings don’t look back. It makes the act of looking part of the exhibition.  The gaze could be the wanted object here, the object of desire. Because who doesn’t want to be seen?