In Hamburger Bahnhof you can enjoy the complex and multi-layered thirteen channel work Manifesto, made by Berlin based artist Julian Rosefeldt (1965). Actress Cate Blanchett explains the viewer in thirteen characters (12 women, 1 man) a century of art history via its manifests, thus becoming one big über-manifesto by itself.

In the last century, most of the new art currents came with its own texts, guide books and/or ground rules, written by the protagonists of the movement in question. This were often young men “bursting with testosterone” as Rosefeldt calls them, which makes their embodiment by a woman all the more interesting.

Blanchett personifies these movements in totally different looking characters. For Dadaism she is a speaker at a funeral, Surrealism is embodied by a puppet maker, who makes her own puppet-version. Manifesto’s for genres are also enacted.  Film for example is presented by  a primary school teacher. For architecture,  the actrice is a single mom, riding her scooter to work in a garbage incineration plant.

Sometimes, the thirteen voices suddenly come together, when the characters look directly at the viewer and proclaim their statements in a monotone voice. It is a confronting moment where all the parts come together, form a unity for a short time, and fall apart again in their own personal stories.

The unity probably refers to the starting point of most of these manifests, their raison d’être. It’s usually a desire to break away from the past and present a vision for the future.

The word manifesto was first used in a political sense, with The Communist Manifesto, written by Karl Marx and Friedrich Engels and published in 1848. Only in the early 20th century, the term made it to the art realm by the use by Filippo Marinetti in his Manifesto of Futurism (1909).

In total, Manifesto addresses 20 art movements  in text experts out of  53 manifests. In an interview (in German) with the Bayerischer Rundfunk, Rosefeldt calls them text collages which are linked to a certain persona. But why is it the funeral speaker that speeches about Dadaism? What has the housewife to do with Pop Art? 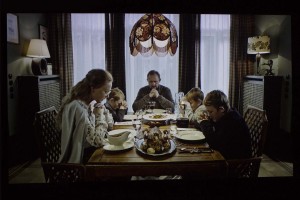 Rosefeldt uses the original text out of its written context, and puts it in a theatrical form. By doing so,  the artist points even more to what is actually being said. When the news anchor proclaims that “All current art is fake”, it gets new meaning. But also because the spoken text and the persona can conflict with one another. For example the conservative housewife, who  sits together with her family at the dinner table and starts praying. She presents exactly the scenery that Pop Art wants to break away from.

In that sense, we get thrown back to the origins of the art manifest, the need to break away. Rosefeldt links this statement to the thirteen characters, playing a role one could identify oneself with.

The texts are linked to real life characters, because, in fact, we all make our personal manifesto’s. It’s like a rite of passage, when we enter into adulthood. Everyone goes through the phase of examining ones past and choosing what will accompany us into the future. 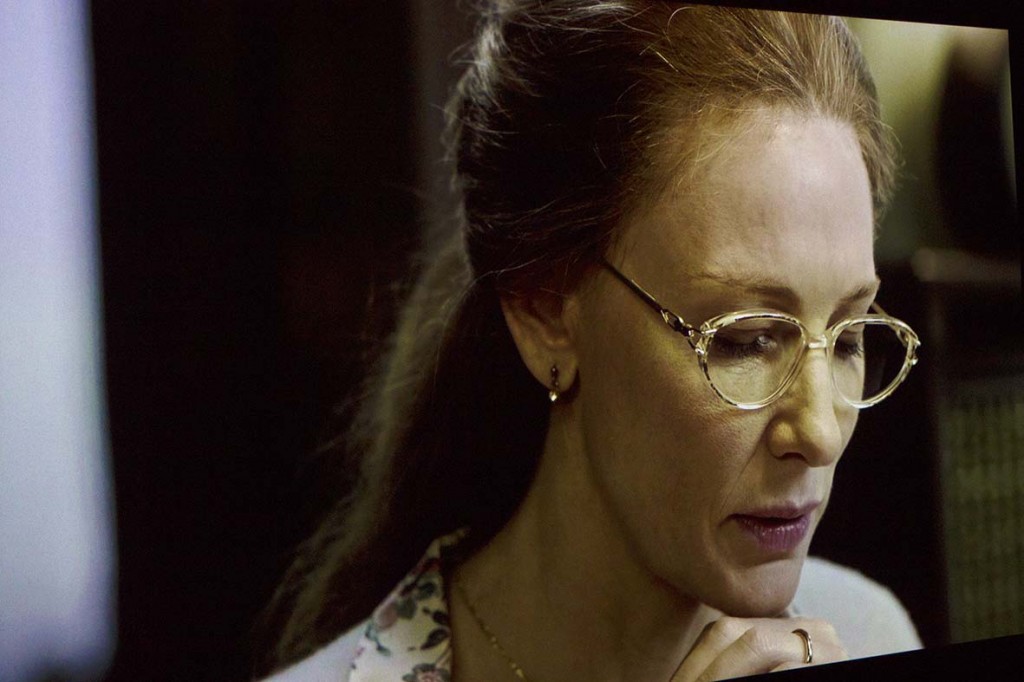 So when the housewife is  praying out of Claes Oldenburg’s Manifesto (of which he insists by the way it is not a manifest but a literary effort), instead of the bible, it refers to our personal belief system. She prays: “I am for the majestic art of dog-turds, rising like cathedrals” and her children at the table laugh. But not for long, because when they grow up it is their turn to break free.