“We have to talk”. This sentence usually implies it’s time to get serious, to get real. The theme of this year’s transmediale, festival for digital art, culture and performance,  called Conversationpiece, aims to do just that. Focused around four directions: Anxious to See, Anxious to Make, Anxious to Share and Anxious to Secure, talking is presented not as something informal, but as a necessity. Two art installations in this 29th edition of the festival, held in Haus der Kulturen der Welt, felt anxious to talk about money.

Precarious Marathon
First of, the media installation by Dutch researcher/designer Femke Herregraven called Precarious Marathon, shows a virtual panel discussion between four arty types: a moderator, a trader, an artist and a critic. They are each represented by their own screen, where we see lines moving, incarnating the four. The artist, for example, could be the big knot, where ideas, thinking lines and associations come together in one big chaos. And the moderator has to be the screen with the three lines, trying to balance the input of the other three participants.

What we see is not a real discussion.The four characters are programmed chat-bots who each play their role according to a set of behavioral patterns. It’s a commentary on the changing art market, which is becoming more digital and virtual, where the majority of sales are made online, via a picture on Instagram (for more on this topic, read the excellent article by Marc Spiegler for the Art Newspaper). 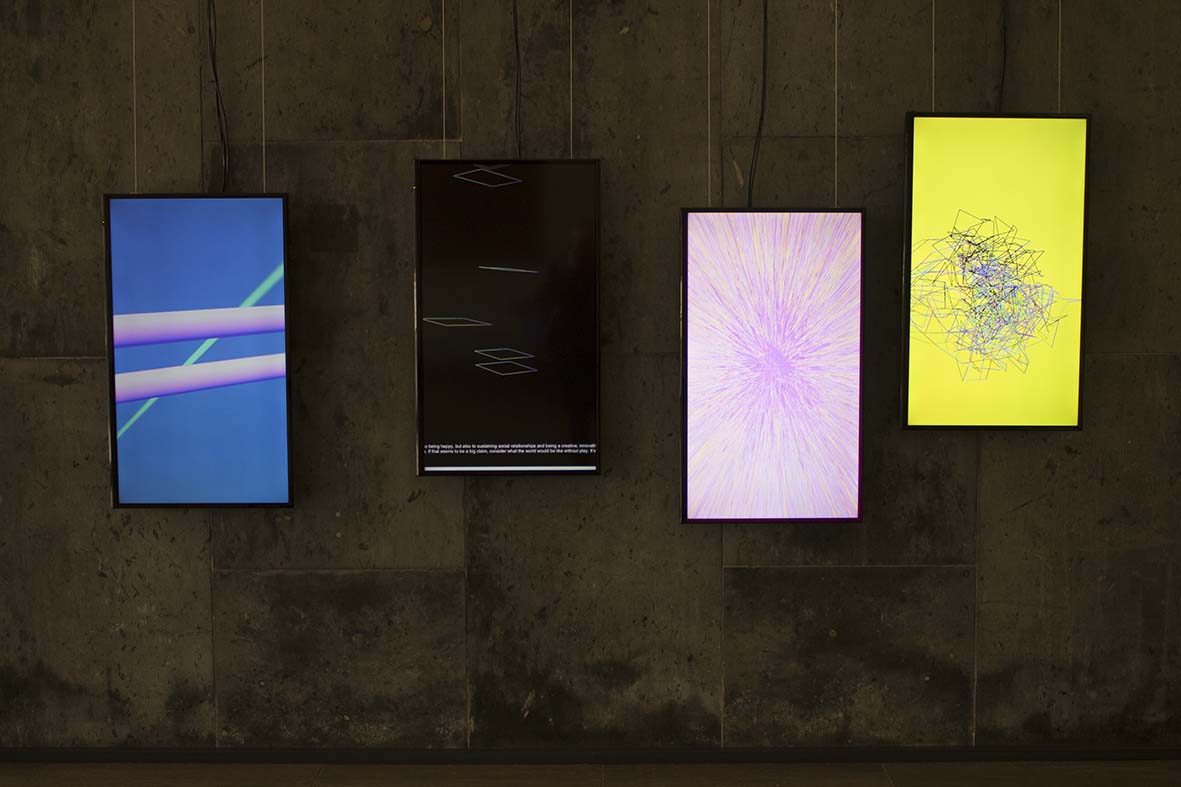 Herregraven is interested in these invisible networks that never sleep, but mostly run through  tangible cables. These information streams are digital replacements for trading routes from the old days, like sea routes. Although more and more data is transferred by radio waves, Herregraven says it is good to realize that most of the data still travels through cables. Thus she proposes it looks more like a “never ending plate of spaghetti”, with lines crawling through one another. Now she uses these lines to incarnate four art types.

Interestingly enough, Herregraven includes a trader and not a gallerist. Like Spiegler states in the above mentioned article, it might be time to rethink the whole gallery system because the market as well as the type of collector is changing. It’s no secret the art world is becoming more and more financial. The number of fairs are still rising, accommodating a new type of busy, busy buyers who have no time to visit a gallery on a Saturday afternoon. Thus it may also be time to stop being so secretive about prices.

Market for immaterial Value
This is exactly what Valentina Karga and Pieterjan Grandy want to talk about. Their installation Market for Immaterial Value gives the viewer  the ability to actually participate in the art market, to be part of the making visible of it’s mysterious money streams.

The visitor is invited to buy an equity of an art piece, specially created for the occasion. It’s a small coin shaped object called Valentina and Pieter invest in themselves, made of gold, with the heads of the artists on one side. It can be obtained after discussing it with the artists, at a minimum of 10 euro’s. If you buy a share, you get a certificate of the transaction, accompanied by a picture of the art work. This means that the actual art object consists of two parts, which could be sold independently, each creating their own market. Well, and actually there is a third part, a meta vision of how value is created. 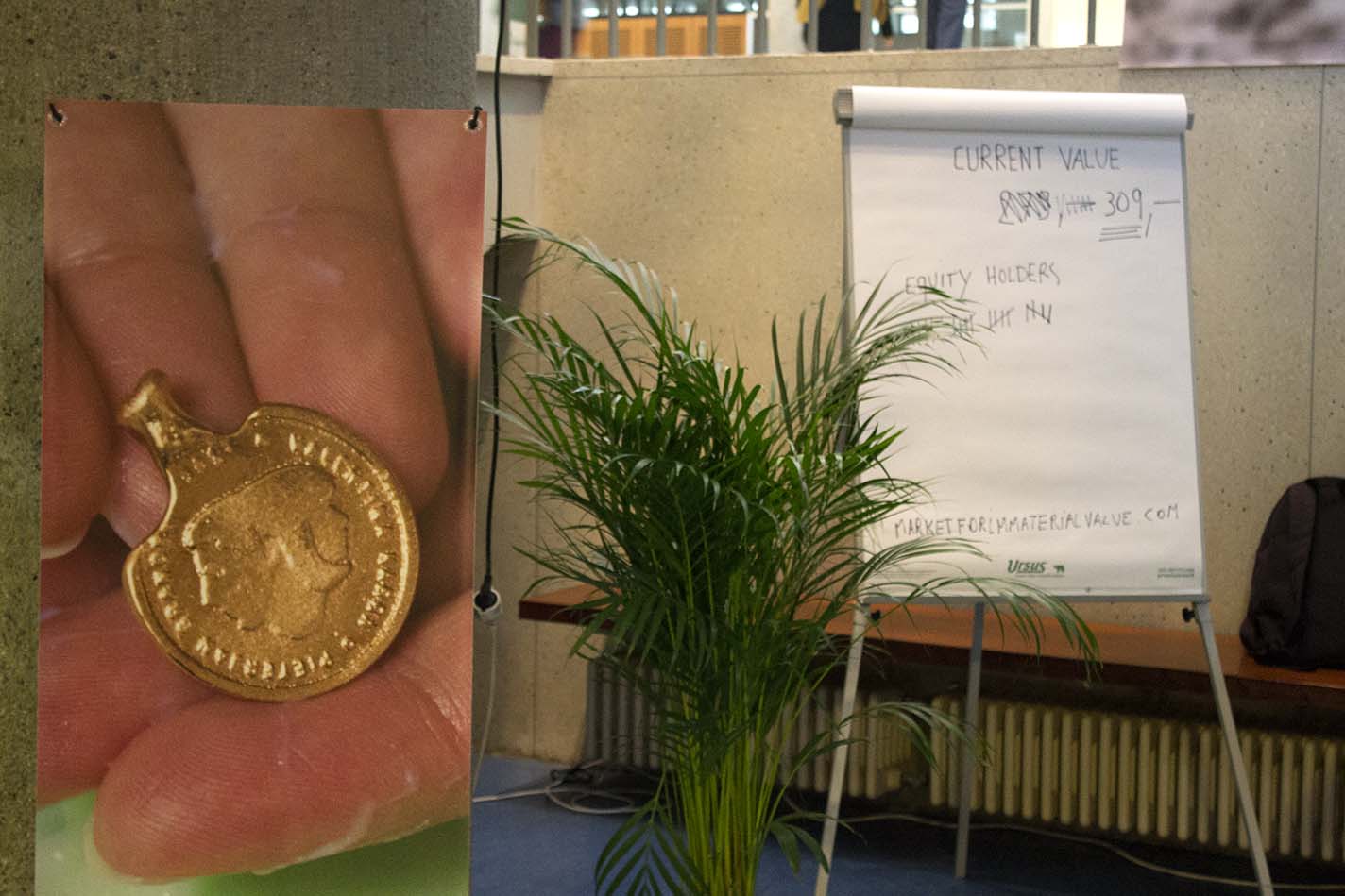 At the end of the transmediale, the object was owned by 21 people, who paid together a sum of 324 euro’s for it. If one of the shareholders would want to exhibit it, the other owners would decide via an online referendum on such a request, discussing the terms. In theory, one new buyer could buy the rest out. In such a case the profit would be divided dependent on the original amount paid.

In fact, the project is a way to research a more sustainable way to run an art practice. But it also works the other way around. It inherently contains a vision, a proposal on how to be a future art collector. Why not co-own an artwork (or several) in the private sphere? There should of course be ground rules. For example to divide “hanging time” amongst its shareholders, rules for exhibiting and selling, sharing insurance costs, transport and (possible) maintenance.

It makes art accessible to a broader audience, rescues it from being put in depots and thus increases its visibility. It opens up new trade routes, from one owner’s house to the next.

To yearn for
At the same time, it puts yearning back into play. Like the toy that was put away for a while, or the Christmas ornaments that you had to wait another whole year for. In a society with images ready available, it is a nice thing to long for, pine over or crave an image. That gives it new value.