Alicja Kwade (Poland, 1979) seems to be everywhere this year. In Berlin we could see her work GoldVolks at abc– art berlin contemporary. At the same time, an overview of her work called Monolog on the 11th floor opened in Haus am Waldsee. 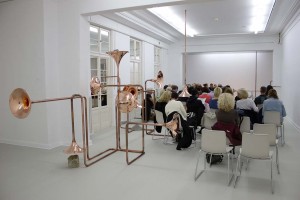 The exhibition is a accumulation of her ten year art practice, since she graduated form the Universität der Kunste in 2005. And as she explained herself during the artist talk, it is a chance to see “how the new came into the world”. This “new” refers to the objects, which are the result of the transformation of an idea into a physical form. The thought that became a work of art.

One of her inspirational sources, and very visible in this exhibition, are scientific processes. When she comes across something that triggers here, she does what a lot of us would do; google it till you can’t google no more.

An example is the discovery made by Jacob Bernoulli in the late seventeenth century, that the spiral can be found everywhere in nature. This theory literally found it’s shape in the work Eadem Mutata Resurgo 3 ( transformed I rise again as the same), (2013). It is a curled door, that may be also refers to life, that also spirals in the same circles over and over again. Kwade states the spiral as one of the most intriguing forms, because it has no beginning and no end. It could go on forever.

Less obvious are the strange trumpets, who got nothing to do with music and everything with the theory of wormholes (for my non Star Trek friends: this is the theoretical possibility of the folding of space, creating a tunnel between two distant regions). These copper shapes are connected to tubes that go through walls and through the ceiling, making of the entire Haus am Waldsee an Alicja Kwade universe.