In February and March we visited several exciting spaces around Kottbuser Tor. In this alternative area, a lot of established galleries have put down root, as well as more experimental spaces. A great mix for our next Gallery Quest!

On February 23rd, we started with DAAD Gallery where an immersive video installation by Italian artist Rossella Biscotti (1978) called The City was on view. For 2 years, she filmed the excavation of one of the oldest know urban centres, in Çatalhöyük in today’s Konya in Turkey. It is supposedly founded around 9000 years ago. Home for around 10.000, people have been living there for more than 2000 years!

Researcher Ian Hobson was very interested in the social make up of this society, which apparently was very egalitarian. He treated his research team in the same way, with local volunteers working side by side with scholars. The archeological site was closed prematurely because of the military coup in Turkey in summer 2016, because of safety reasons. This way, contemporary Turkish society showed a sharp contrast to this proto-society form the Neolithic era.

Around the corner in a court yard in the Prinzessinnenstraße, we visited Klemm’s and Soy Captain. At Klemm’s, new paintings by Scottish artist Fiona Mackay (1984) where on view. Under the title Dreams, we saw a flood of images that came into being during a residency in Marseille in 2017-2018.

Working with some kind of textile dye on cotton paper, the reference to clothing makes them feel like these layers to cover something. The thing is with this medium, you cannot make mistakes. It works like watercolour, you can’t paint over it. It has to be right, so you have to know what you are doing. In contrast to water color, the colours of this dye are really intense. More layering can be found in the titles of the individual drawings, which bring a poetic depth to the visuals.

At Soy Capitan, the exhibition Out for a stroll was like a portfolio, with works by all the artists of the gallery. For example these great collages by Spanish artist Eli Cortiñas (1979) called From an ethnographic museum revisited. Different layers of images are glued over one another, like an analog Photoshop file. Sometimes you cannot see or identify the underlaying layer anymore. Like a browser, where different screens are open next to one another, somehow connected with each other, triggered by the tab that came before.

All the images seem to have something to do with objects that can be found in ethnographical museums. Different cultures from all over the world are mixed with other types of pictures, for example of animals. The collages refer to a series from the early thirties, made by German artist Hanna Höch (1889-1978), the so-called it-girl of the German Dada- Group. She also mixed pictures form ethnographical museums, male with female, north with south, west with east, to create an egalitarian view of the world.

With her very progressive series she was way ahead of her time. To call her an ‘it-girl’ is an insult to her talent. As Cortiñas puts is in an interview from 2017: “ The fashionable so called ‘discoveries’ of female positions in the last years, most of them being ‘discovered’ in older ages or already dead are for me a form of neo-colonialism.”

Our next stop is Nostalgia, an exhibition with works by American artist David Horvitz at Chertlüdde. Well, that was the name of the exhibition when it opened anyway. At the moment of writing it changed to our share of morning and when we visited the gallery it was A Brief Crack Of Light Between Two Eternities of Darkness (which is a line from Vladimir Nabokovs biography Speak Memory: a memoir from 1951). The changing title is a work in itself in the exhibition.

The exhibition consists of two parts. Upstairs hanging on the wall in the handwriting of the artist is a neon work which reads all the time that came before this moment, al the time that will come after this moment. Downstairs we find the installation Nostalgia, which shows 15.990 photos from his private archive. Each photo is shown for one minute. After the exhibition they will all be deleted.

Horvitz plays with momentum. The title changes randomly during the exhibition, his birth year remains a mysterie when you google him. On his website you can buy one minute of his time, which he will spend thinking of you, emailing you the time he starts. The strange thing is, it works the other way around. I have been thinking of him ever since, wondering when that moment will come. 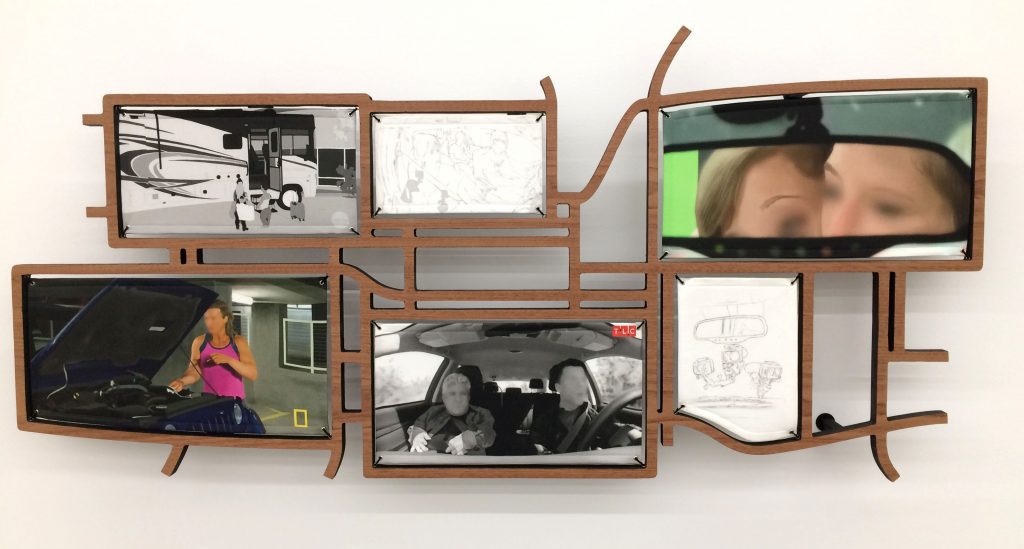 Remember the traveling circus in the 19th century, where everything that seemed weird at the time was put on display for ‘normal’ people to take a look at? We now think that is demeaning, but Crespo argues that this practice actually never stopped and that tv took over this role. Think of tabloid talk shows (remember Jerry Springer or Doctor Phill), but also medical documentaries where surgeries are broadcasted for everyone to see. Or MTV’s The real world, starting point of real live tv shows since the nineties.

The internet topped things off, coming pretty close to the nasty-ness of the human circus of which we thought that was out of an era long gone.